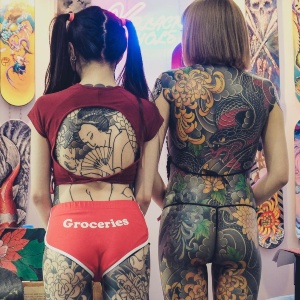 THE BIGGEST TATTOO SHOW IN CHINA

The Langfang Tattoo Festival in China (about 50km from Beijing) is arguably one of the largest shows on the planet and the oldest one in China.

Started in 2005 as a relatively small show, it consistently blossomed into the massive tattoo convention which is today. This year the convention showcased a lineup of over 500 international tattoo artists, a staggering 52 tattoo suppliers and some of the biggest names and personalities in the whole tattoo industry. Which probably gives and idea of the increasingly Chinese impact in the tattoo market.

As every Asian tattoo show this has been an incredible showcase of of extremely refined tattoos and bodysuits. I love Asian style tattoos, so this was for me like an overload of beauty to admire.

Given the sheer size of the event it’s practically impossible to give a fair glimpse of it, so I’ll have to go by, with what I’ve personally seen and experienced.

The convention has been held at the Langfang Conference and Exhibition Center. A colossal and modern, trade fair structure just outside the center of Langfang. The floor-plan had four distinct sections: 3 for the artists and one dedicated to the suppliers, which included many of our sponsors.

Most guest (including me) have been staying at the superb Ennova Seven-Cultivation Hotel. This stunning place decorated in traditional Chinese style it’s possibly one of the most amazing hotels I have ever been, in my life. It hugely contributed to make this experience really memorable as it has been the perfect ambiance to meet and hang out with many friends and tattoo legends. The whole hotel felt more like an open museum and the traditional Chinese rooms where absolutely stunning.

The event has been hosted by Hot Tattoo, one of the most prominent tattoo studios in Beijing. Organizing an event of this scale, in a country  like China, it’s without doubts not an easy feat. They really went out of their way, to take care of all their international guests and they even organized several busses and taxis to get most western artists in and out of Langfang. Without this extra service, I doubt it that most people would even make it at the convention. Worth to mention that the really big guests got even picked up in Bentley and Rolls Royce rides.

As already mentioned this convention has been able to bring together some of the finest and most admired artists on the planet. I would really like to mention most of them but this article would become extremely long. So these are just a few of the special artists I’ve met at the convention:

Arguably the biggest tattoo legend present at the show. Jack is in-fact the godfather of modern Black & Grey and single-needle tattooing. He has been tattooing for over 50 years and his shop has been open for over 44 years. He appeared in the highly acclaimed Tattoo Nation movie documentary and when I met him for the first time at the London Tattoo Convention in 2014, he told me that by that time, he had already been to over 400 tattoo conventions around the world. I felt so small. This time while having another chat with him, he even genuinely really liked some of my black & grey tattoos on my left arm. A priceless moment for me.

Shige is the owner of the world famous Yellow Blaze Tattoo studio in from Yokohama. He is definitely one of the most respected and appreciated tattoo artists on the planet, thanks to his magnificent bodysuits and unique tattooing style. During the convention, his booth has constantly been surrounded by a large crowd trying to get a glimpse of his art. Interesting facts about Shige is that he is completely self-taught and he never had any form of apprenticeship. His own bodysuit, which he always shows at conventions while tattooing has been mostly made by another tattoo legend: Filip Leu.

Here is another giant which I met for the first time in my life, as this was the first tattoo convention he ever attended since 1999. A return in style celebrated with the biggest booth at the convention together with the Bishop Rotary crew which included some other very high profile artists including the owners of Bishop Franco Vescovi and Steve Soto.

I’ve met Jose’ previously at some other conventions in Amsterdam and Rome, but this time I had the privilege to hang out with him and hear his really inspiring and remarkable life story. He started tattooing at the age of 15 after a life changing event, which permanently placed him on a wheelchair. Despite the odds, Jose’ worked his way up to a legendary status in the tattoo community. Earned thanks to a lot of hard work, talent, sacrifice and the innate ability to inspire people.

Tofi from Poland, was another of the megastars attending the convention, along with his fellow Pro Team artists from World Famous Tattoo Inks (one of the main sponsors of the convention). He has build an outstanding reputation thanks to his unique 3D visionary artwork and to a phenomenal work ethic and dedication. During the convention he shared some very interesting anecdotes of his methodologies and resolutions to keep pushing his limits. This is a guy which has a crystal clear view of what he wants and it’s no wonder that he became who he is today. I actually managed to make an interview with him, which I will publish on a separate article soon.

Most people have probably never heard of this young tattoo artists from the Philippines, but he is on his way to the very top of this industry extremely fast. In just a month he managed to win 3 the Best of Show Tattoo in a row at the Singapore Ink Show, the 10th Taiwan Tattoo Convention and here in Langfang and the China Tattoo Convention. A really impressive achievement thanks to his unique skills and 3D tattoos. And fof 3D tattoos, I don’t mean tattoos with some depth in them. I mean that you really need 3D glasses (like for a 3d movie) to see the whole composition. It’s beyond me how he does that.

We had the honor to have such a beautiful human and talented artists as Reese Hillburn as World Tattoo Events Pro Team member. Reese which is based in San Diego starred on the US Tattoo Nightmares TV Show and along with her fellow friend and tattoo artists Lily Barrios has been a phenomenal attention catcher and possibly the most photographed person at the whole convention. Her positive vibe it’s so contagious that she heavily contributed to some of the best moments during the conventions days.

Federico from Italy was another WTE ProTeam member which honored us with his presence. Despite his relatively young age he has already 20 years of experience as a professional tattoo artists. He founded a very successful studio close to Rome called Elegant Goat Tattoo Gallery and he has currently been guesting at some of the most famous East Coast Tattoo Studios. Federico is in my eyes the old school, no bullshit tattoo artists which owes his own success to a stoic amount of hard work, dedication and passion for the art of tattooing.

I’ve met Yeyo Molina from Argentina for the first time. This extremely nice and humble guy which was part of the Makuza ProTeam, really blew me away with he this super refined tattoo which he made at the convention. And in fact he got a very well deserved 2nd place for the Best of Show prize.

Visiting this show has been a very valuable experience to understand a few important things about the booming tattoo culture in China.

There are obviously several cultural differences between China and the rest of the world. And the tattoo culture is no different. The really great benefit of this kind of events, is that they provides a great opportunity to understand and learn each other’s peculiarities

So if you are in the tattoo business, make sure to go to China and see for yourself what’s going on.

Also make sure to be prepared about the following:

GET A PHONE VPN

I did heavily under-estimate how efficient the great Chinese (fire)wall really is and I have basically found myself for almost a week with practically no access to the (western) internet. The longer I have ever been since 1996.

So if you come to China, come prepared!! And install WeChat and VPN’s BEFORE you come. Doing it once you landed it’s going to be very very difficult (if not impossible at all).

Despite the fact that China is an economic super power, it’s still very hard to communicate in English with most people. So make sure to bring a very efficient translator or phone app. Or even better: learn some basic Chinese. Just a few words will get you a long way in China.

However despite these futile obstacles, this has been a phenomenal experience and I’ve to credit the organization for their efforts in minimizing these problems. A big thank You goes to the whole organization, the guys of Hot Tattoos, the support crew and to Angelina, which constantly went out of her way to help us every time we needed it. Also thank you the awesome guys of Makuza Tattoo Magazine from Chile for being such awesome buddies during the conventions days. Last but not least a MASSIVE thank you to all our our sponsors for making this possible.