The Blackwork style is not new even if it seems to benefit from a broad media coverage recently. Black is the first and most influential color in Blackwork or Darkwork. The color has been used by artists since the creation of tattooing in the ancestral tribes. Black tattoos are much more than a recent trend as it is ultimately connected to the origin of tattooing.

We are pleased to see that the artists redefined the art of Blackwork tattoos by bringing original ideas with their techniques and skills. Some of them specialize only in this timeless tattoo style and contribute to the evolution of our art. Almost any design can be interpreted and prepared to fit for a total black ink. They are ideal to coverup older tattoos with a fresh stunning project. 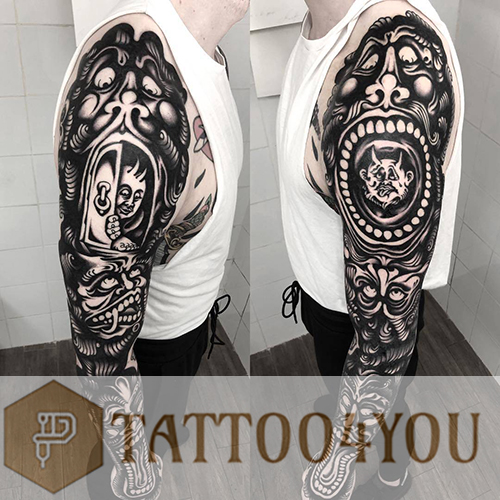 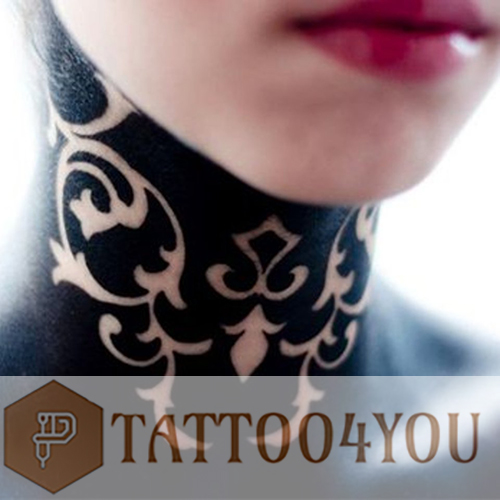 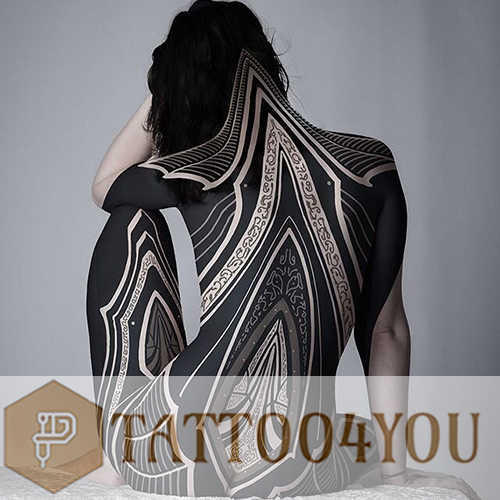 What is a blackwork tattoo?

A blackwork tattoo is a bold work of body art rendered in solid planes of black ink. Usually, these tattoos are composed of abstract patterns and geometric shapes, though some feature figurative forms and recognizable scenes and subjects.

All the variants of dark are here: bold or fine-line, dot work, and whip shade allow talented artists to create mystical patterns with supernatural effects. The designs asked for are mostly tribal, or neo-tribal inspired; however, the possibilities are endless.

However, going for a solid blackout sleeve or any other massive piece is a deep commitment. Indeed, this ink intends to say for good and will be way harder to get laser removed if you don’t like it anymore over time.

Black is a powerful and symbolic color that looks stunning on any skin type. It is the original and pure tattoo color. The most unique tone you will find in most tattoos you will spot randomly out there. Even with one single tint, the technics, and skills tattoo artist build on allow us to push the boundaries of the tattooing art.

The History of Blackwork Tattoos 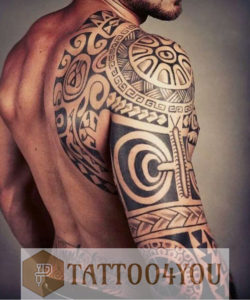 Although Blackwork tattoos have come to mean something much different, the origins of the style lay within ancient tribal tattooing. Polynesian pieces, known for their often abstract patterns made of shapes and swirls in large swaths of black ink, are a huge influence on the style in particular. Curving around the organic contours of the body, these tattoos were usually based on the person’s personality, with the tattooist using symbology and tribal iconography to illustrate their life story or legends.

Frequently Polynesian tattoos embodied a person’s lineage, beliefs or affiliations. They were protective, and absolutely sacred in nature. Polynesian tattooists were regarded almost like shamans or priests who held the divine knowledge of tattooing ritual. It was these ancient aspects of culture that largely influenced Blackwork tattooing of today, and many tattooists that work within the tribal style still hark back to these ancient aesthetics. You can see the influence clearly in the expertise of Haivarasly and Hanumantra Lamar.

Since the 18th century, these Polynesian-inspired tattoos have proven popular in Western culture. In 1769, British explorer James Cook traveled to Tahiti, where he grew fascinated by the tribes’ tattoos and subsequently introduced Europe’s working class to the phenomenon. According to the Smithsonian, “The marks then became fashionable among Europeans, particularly so in the case of men such as sailors and coal-miners.”

Another aesthetic linked to the esoteric arts is sacred geometry, a Blackwork tattoo style that is extremely popular. From ancient Hindu texts to Plato’s idea that God has put perfect geometric structures hidden within the entirety of the natural world, the ideals can be seen in fractals, mandalas, Kepler’s Platonic Solid, and more. Setting divine proportions to everything, sacred geometric tattoos often consist of lines, shapes, and dots. 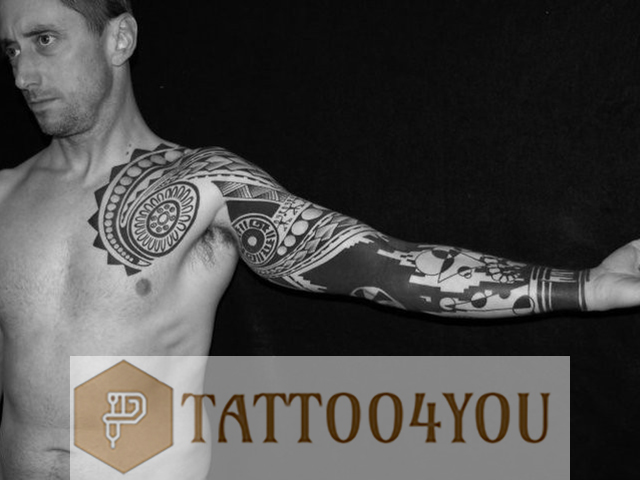 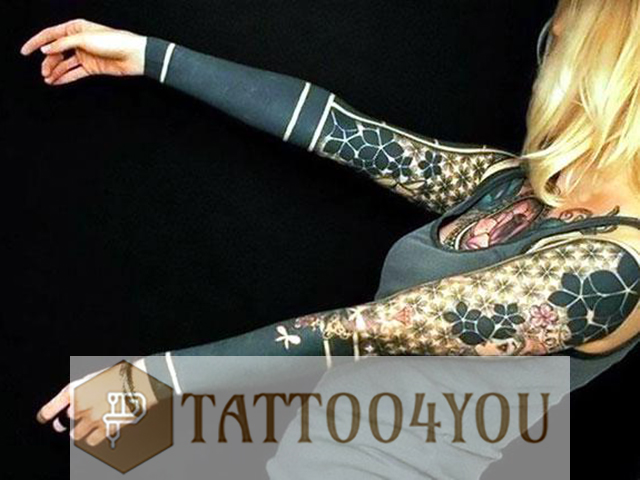 Another inspiration for Blackwork tattooing is gleaned from what is typically regarded as Spanish Blackwork, which is actually fine embroidery on fabric. Tightly twisted black silk threads were used either in a counted stitch, or in a freehand manner, on white or light colored linen fabrics. The designs ranged from florals such as labyrinthine illustrations of ivy and blossoms to more complex compositions like stylized graphical knots. Although this technique was flourishing in Spain during the 1500’s, similar in form is Kasuti embroidery. Kasuti is a traditional art practiced in Karnataka, India which dates back to the Chaluyka dynasty that ruled from 543 to 753. Like Spanish Blackwork, Kasuti is intensely intricate in its aesthetic makeup, often including over 5,000 hand stitches but differs in its use of brightly colored threads.

No matter who far these folk arts may seem to be disassociated from contemporary Blackwork tattooing, it helps to recognize the different facets of historical artistic techniques and mediums that inform modern styles and aesthetics. Henna, for instance, can be traced back to the Bronze Age which spans from 1200 BC to 2100 BC. This was 4,000 years ago in the history of humankind, and yet the application of Henna dye, called Mehndi, can easily be connected to present day ornamental and decorative tattoos, most of which are considered a form of Blackwork tattoo simply due to the lack of color.

Blackwork tattoos are a classic. Popularized with Polynesian tribal tattoos, with roots centuries deep, blackwork has come to involve a variety of design styles.

Today, blackwork comprises a variety of tattoo designs that use only black ink for drawing and shading. The solid black ink is a bold look that is striking in any style.

We take a look at some of the most popular blackwork tattoo designs. 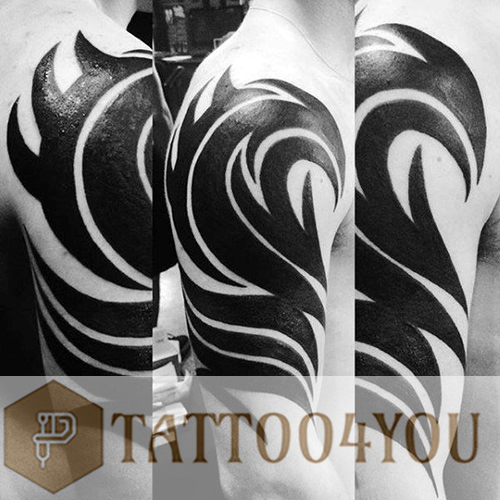 Some of the patterns used in tribal tattoos date back as far as 2000 years ago. They can be simple with thick stripes and patterns, or intricate fine line tattoos.

Today, they are most commonly worn as half sleeve tattoos. However, Polynesian tribe used to have full body tattoos that would tell a story of the person, their origins, and life. Unlike full body Asian tattoos these are not designed as a single tattoo. Instead, they were several individual patterns that compliment each other and were added over time. 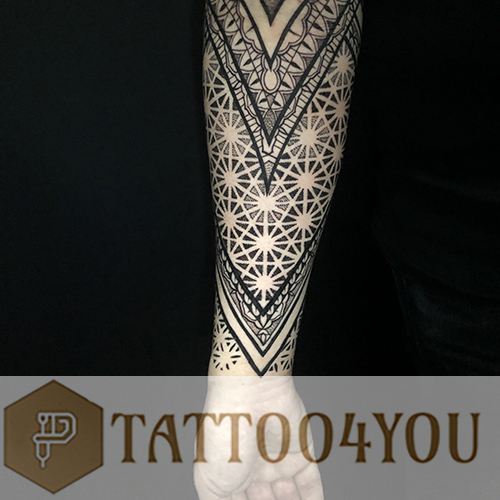 Geometric tattoos have had an upswell an popularity over the past couple of years. They are simple in appearance using geometric shapes. They make use of lines, circles, squares, and triangles to create beautiful, minimalistic designs.

Tattoo artists need to have a thorough understanding of design for geometric tattoos. They break an idea or image down to just geometric shapes while still communicating the intended meaning. Done right, the results can be stunning.

They are commonly used in mandala tattoos and are sometimes combined into realism tattoos for a stunning effect. 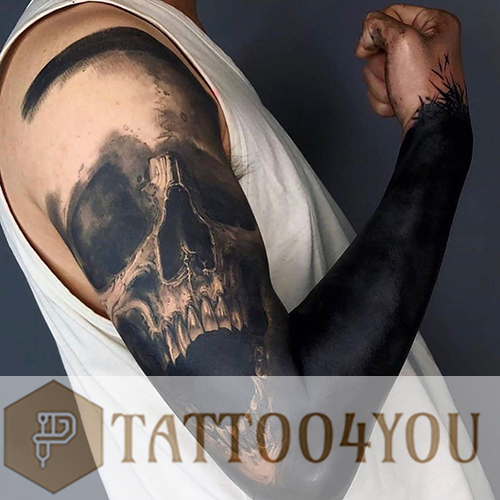 Armband tattoos are one of the smaller versions of a blackout tattoo. They are one or two solid bands of ink that wrap around the arm. And then, of course, there are more intense examples. 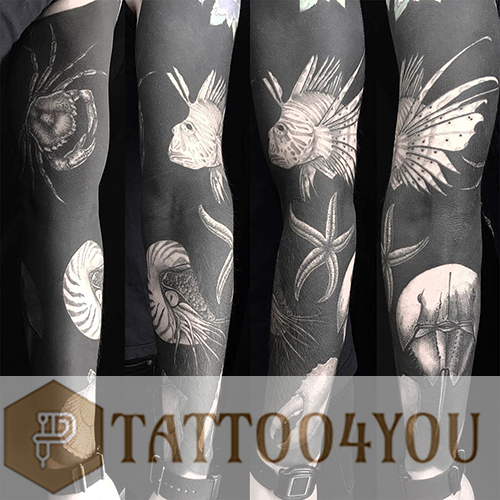 Negative space tattoos are the reverse of a standard tattoo. Instead of the ink being the image, it creates the background and the bare skin (or negative space) is the subject. They are a form of blackout tattoo that is rising in popularity.

The background can be a complete blackout, or a pattern using thick black lines or sections. They may use black and grey tattoos as a background rather than a full blackout. 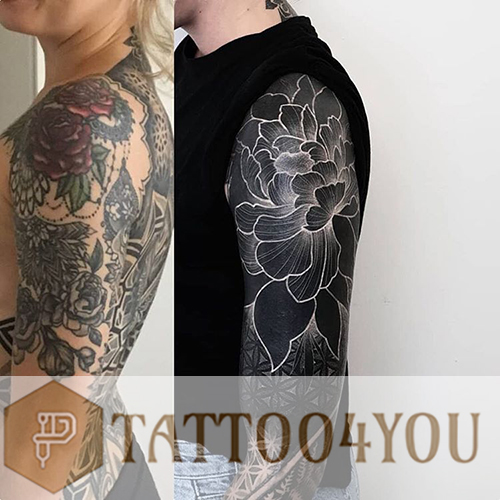 Blackout tattoos are often used as a cover-up tattoo. Often, tattoo artists will ask clients to get a round or two of laser tattoo removal before performing a cover-up. For most cover-ups, this is the best way to give the artist free reign for an awesome new tattoo, instead of one that looks like it’s just covering an old one.

With a blackout tattoo, however, the solid ink makes it an ideal cover-up tattoo. The old tattoo will not show through a sheet of solid ink.

Blackwork is mostly an ornamental style as opposed to portraying meaning or symbolism, though some blackwork tattoos do feature figurative forms and recognizable subjects. Modern blackwork tattoos often incorporate white ink atop the black, or some artists use skin breaks to create their desired effect.

In addition to their recognizable aesthetic, blackwork can be used as an effective and stylistic way of covering up of an old tattoo.

Be sure to take into account that blackwork is almost impossible to correct, close or qualitatively reduce, the maximum – to apply over a little faded tattoo new black or white lines. Colors will merge or get muddy, so carefully work through the sketch with the master.

Also the ability to paint black evenly and without spaces is a skill that beginners masters do not have. When choosing a wizard, refer only to someone with experience, in whose portfolio there are already such works.