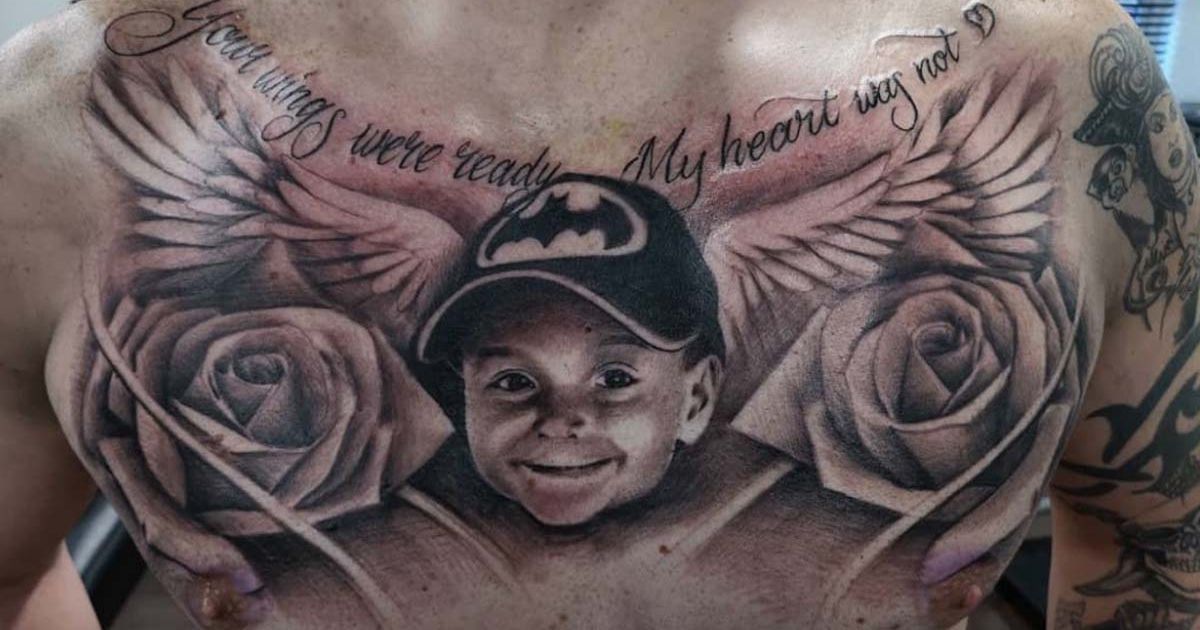 This is the heartwarming tattoo Bradley Lowery’s dad has had done in a touching tribute to the brave little boy. Carl Lowery’s chest inking features a picture of Bradley wearing a Batman hat and his warm smile. The inspirational youngster stole the hearts of the nation as he bravely battled childhood cancer neuroblastoma. Bradley appeared as a mascot for his beloved Sunderland AFC and struck up a bond with their then striker Jermain Defoe. But the boy died aged just six on Friday July 7, 2017 . Speaking after having the tattoo done this week, Carl said: «I miss Bradley every day, and wanted to do something as a tribute to him. «I decided on a portrait on my chest so I always have him close to my heart.»

Speaking to Sunderland Echo , he added: «I am over the moon with the tattoo.» The huge tattoo was designed by Lee Ganley, a tattoo artist from County Durham with more than 10 years experience. It took him around six hours to complete at his parlour, Buzzin Guns in Durham. The poignant writing on the inking reads: «Your wings were ready, My heart was not.»

Lee, who has shared a photo of the tattoo on Instagram , also told Sunderland Echo: «I’m use to doing portraits and I do quite a lot of celebrity faces but there as something special about this. «There’s definitely a little bit more pressure but it was a good photo and a good client. «Carl was really happy with it. He just couldn’t stop smiling. The picture is more fun and it shows Bradley’s cheeky face. «We looked at a few different pictures but his grin on this one stood out and the batman hat makes it a little more unique too. «It was just an honour to do.» Last year, Defoe got a tattoo in memory to Bradley , whom he called his «best friend».

The striker, now on loan at Rangers from AFC Bournemouth, was Bradley’s hero. Their precious bond began in September 2016 when Sunderland hosted Everton in a Premier League clash at the Stadium of Light. And the former England forward was visibly emotional at the boy’s funeral . Following Bradley’s passing, Defoe said: «He was my best friend. He was genuine. He loved his football. He loved me and I loved him. There was nothing I could give him apart from just being a friend.»