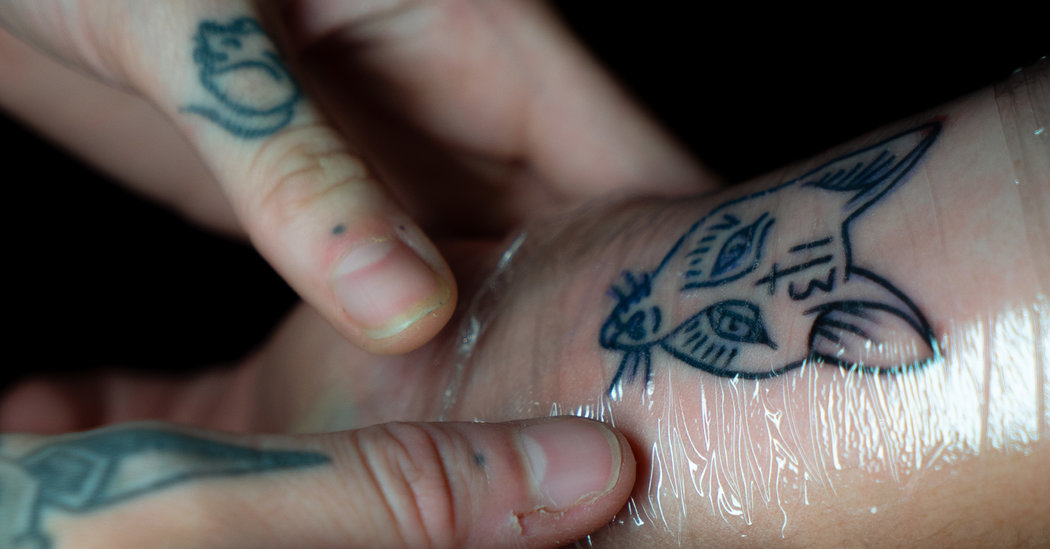 Tattoo veterans and virgins lined up outside tattoo parlors to partake in the tradition of Friday the 13th tattoos, when shops release a “flash sheet” of pre-designed tattoos, many of which incorporate the number 13 and most of which cost just $13 (plus a lucky $7 tip). The day offers enthusiasts the chance to get a professional tattoo for very little money, and it offers shops the chance to promote their work and meet new clients.

“It’s turned into a tattoo holiday,” said Michaelle Fiore, a tattoo artist at the Armageddon Ink Gallery in Williamsburg, Brooklyn, as she applied a purple stencil of an eye with an X above it to the upper arm of an 18-year-old. The flash sheets, taped to the front desk, featured designs by the staff at Armageddon: skulls, black cats, flaming hearts with swords piercing them, spiders, roses, jellyfish, an upside-down bat and a unicorn smoking a cigar. The same tattoos could cost up to $150 on a typical day.

Sara Korniewicz, 21, and Marwan Ramadan, also 21, were waiting in line outside to get their first tattoos together. They had dated for two years and were planning to get matching tattoos. There was just one hitch: Mr. Ramadan did not want his parents to know about the tattoo, since they are religious Muslims and had told him repeatedly not to get one.

He wasn’t particularly nervous about the needle, or having the tattoo for the rest of his life, but he was not looking forward to “the stress of hiding it for the next year or so,” he said.

Ms. Korniewicz had not yet chosen which tattoo she would be getting — the shop had only revealed the full set of options that morning.

But she was, after all, in line to get a permanent tattoo with her boyfriend.

“We’re pretty confident in our relationship,” she said.

Farther down the line, Lauren Pugh, 19, stood in the sun next to an oversized purple suitcase. She was visiting the city from England for three weeks, and had decided to get a Friday the 13th tattoo to remember the trip.

The tradition traces back to Oliver Peck, the co-owner of Elm Street Tattoo in Dallas and a judge on the reality TV show “Ink Master.” Mr. Peck was included in the Guinness Book of World Records for drawing the most tattoos in a 24-hour period, after he tattooed the number “13” on 415 people on a Friday the 13th in June 2008. (His ex-wife held the previous record.) He held the first Friday the 13th tattoo event back in 1996; since then, the tradition has spread all over the world.

In New York, Maria Carrasco and Luz Catoggio, cousins who grew up together in Queens, were first in line at Abuela’s Tattoo Parlor in Brooklyn, along with Ms. Catoggio’s husband. Ms. Carrasco, 49, who had short blue hair and silver sneakers, was planning to get a small heart with “F.U.” nestled inside.

“It also can be fired up,” Ms. Catoggio said encouragingly. “So she’s fired up for love!”

Not all the participating tattoo artists were thrilled about the extra work.

Nelbo Cordero, an artist at Abuela’s who has been tattooing for 11 years, said this would probably be his last year doing Friday the 13th tattoos, though he expected to make at least $1,000 over the course of the day. The shop would be open until 3 a.m. on Saturday.

“Most of these people don’t get tattoos normally,” he said, adding that they don’t pay full price for the designs. “It’s kind of frowned upon.”

Mr. Cordero also offered some advice on the most accurate way to ask a true aficionado about his tattoos: Don’t ask him how many tattoos he has, but instead ask how many hours he has on him. That’s because a fingernail-sized tattoo and a forearm-length tattoo both count as a single work, but they require vastly different amounts of time and skill to complete.

Asked how many hours he had, Mr. Cordero said, “at least a week.”

Daredevil Tattoo in Lower Manhattan had a waiting list of 125 people by 10 a.m. on Friday, two hours before the shop officially opened. The first person was in line at 5 a.m. The shop was saving 75 more slots for regulars who had gotten tattoos at Daredevil before.

Michelle Myles, a co-owner of Daredevil, said her shop loses money during the Friday the 13th tradition, because the tattoos are cheap and the artists get to keep 100 percent of the profits. But still she enjoys the day.

“I like our tattoos to be accessible,” she said.

“I like doing these. They’re fun,” said Diego Mannino, 44, a tattoo artist who has worked at Daredevil for more than eight years. “It’s kind of a treat for regular clients who come a lot.” Mr. Mannino was “about 90 percent covered head to toe all the way around” with tattoos, according to his estimate.

Across the city, the lines inched along. Shinekwa Kershaw, 27, stood outside Armageddon armed with an umbrella, a lawn chair and a bottle of spray sunscreen. She was waiting to get her fourth Friday the 13th tattoo.

In the beginning, she came because of the low prices. But now, she said, she came for other reasons, too.

“It’s kind of cool to think you’re getting the same tattoo as everyone in the city,” she said. “It’s a marked moment for everyone.”