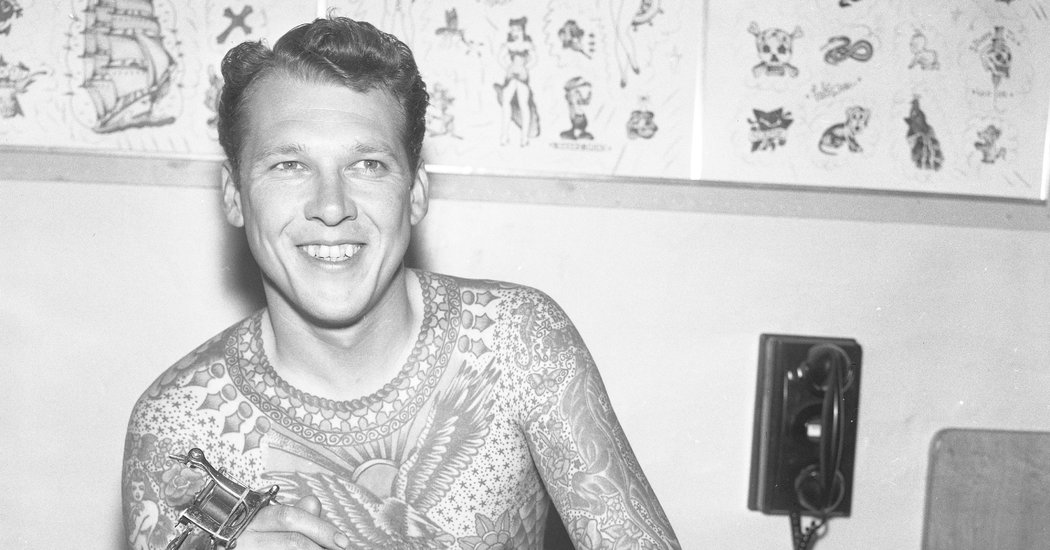 Lyle Tuttle, a tattoo artist who found his own kind of international fame by catering to celebrities while helping to move tattooing, as he put it, from the “back alley” into mainstream acceptability, died on March 26 at his home in Ukiah, Calif., where he had grown up. He was 87 (and practically covered in tattoos himself).

Danielle Boiardi, the curator and manager of the Lyle Tuttle Collection, said Mr. Tuttle had been in hospice care after an inoperable growth was discovered in his throat about two weeks before he died.

These days tattoos are commonplace, inspiring clothing lines and museum shows and adorning people from all walks of life, most publicly actors, athletes and musicians. But when Mr. Tuttle first took up the needle in the late 1940s, tattoos were practically unheard-of in polite society, more associated with sailors, criminals and sideshow freaks.

Mr. Tuttle had been a tattoo enthusiast — both as an artist and as a recipient — since he was a teenager. He was mentored in the 1950s by storied tattooists like Bert Grimm, and he worked in the trade in California and in Alaska before he opened his own shop in San Francisco in 1960, wanting “to get tattooing out of the back alley,” as he told The San Francisco Chronicle in 2002.

His shop became a popular destination for members of the San Francisco counterculture during the 1960s, and by the end of the decade he was being sought out by the likes of Janis Joplin, Joan Baez, the Allman Brothers, Peter Fonda and Cher.

“Janis was a wild and crazy girl — I put a bracelet and a little heart on her breast,” he recalled in 2006 in an interview with The Columbus Dispatch in Ohio. He said he had given Ms. Baez “a small blue flower on her back.”

His tattooing of rock stars drew the news media’s interest, as did the elaborate designs covering his own body (except for his face, hands and feet). Dozens of well-known tattooists, like Tahiti Felix Lynch and Painless Nell, did the inking. Some of Mr. Grimm’s standout designs could be found on Mr. Tuttle, including a full back tattoo that showed two eagles squaring off over the title “Duel in the Sun,” and a coat of arms on his torso that featured a chicken and a feather with a Latin version of the phrase “Chicken today, feathers tomorrow.”

Photographs of Mr. Tuttle, with the scruffy hair and sideburns of a rock star, appeared on the cover of Rolling Stone and inside Life magazine accompanying an article about the growing popularity of tattoos among women. At one point the elaborate tattoos on his back, arms and torso were reproduced for a long-sleeved shirt, which was said to have sold in the hundreds of thousands.

Spider Webb, another renowned tattooist, said in a telephone interview that he saw Mr. Tuttle as an eloquent “spokesman for tattooing.”

“The breakthrough that he made was in people’s minds,” he said, “tearing down prejudice, and that’s kind of a beautiful thing to do with your life.”

Lyle Gilbert Tuttle was born in Chariton, Iowa, on Oct. 7, 1931. His parents, Howard and Opal (Castor) Tuttle, were farmers who later moved to Ukiah to escape drought. His father became a contractor there.

Lyle got his first tattoo at 14, a heart emblazoned with the word “Mother,” after seeing similar tattoos on servicemen returning from World War II. He paid $3.50 for it in a San Francisco parlor.

“For me, guys with tattoos had been someplace — or at least out of the valley,” he said in 2006, referring to the Ukiah Valley in Northern California.

The tattooist who inked him for the first time was Ralph Kaufman, widely known in San Francisco as Duke. By the late 1940s, having dropped out of high school in Ukiah, Mr. Tuttle was working with him.

After a stint in the Marines during the Korean War, Mr. Tuttle went on to work with Mr. Grimm in Long Beach in the mid-1950s. From there, in 1957, he moved to Alaska, where tattoo artists were rare, and worked for a time in Anchorage and Fairbanks.

Mr. Tuttle is survived by his wife, Judy (Aurre) Tuttle, and a daughter, Suzanne Tuttle, from an earlier marriage, to Betty Lawson.

Mr. Tuttle retired for the most part in the early 1990s. But he remained a celebrity to aficionados, appearing at tattoo conventions around the world and sometimes inking fans with a stylized version of his autograph. He signed the last one a week before he died.

He said he had tattooed at least one person on each continent, including Antarctica, and amassed what many enthusiasts consider the world’s largest collection of tattoo-related artifacts and artwork, like versions of tattoo designs on paper. He drew on that collection to open a small museum in San Francisco dedicated to tattoo history. (It has since closed.)

Mr. Tuttle frequently said that he never regretted his own copious tattoos. But he did advise restraint, especially with face and head tattoos, which have become increasingly common.

“It’s a matter of privacy,” he told The Los Angeles Times in 2004. “Hey, I look civilized with my clothes on.”