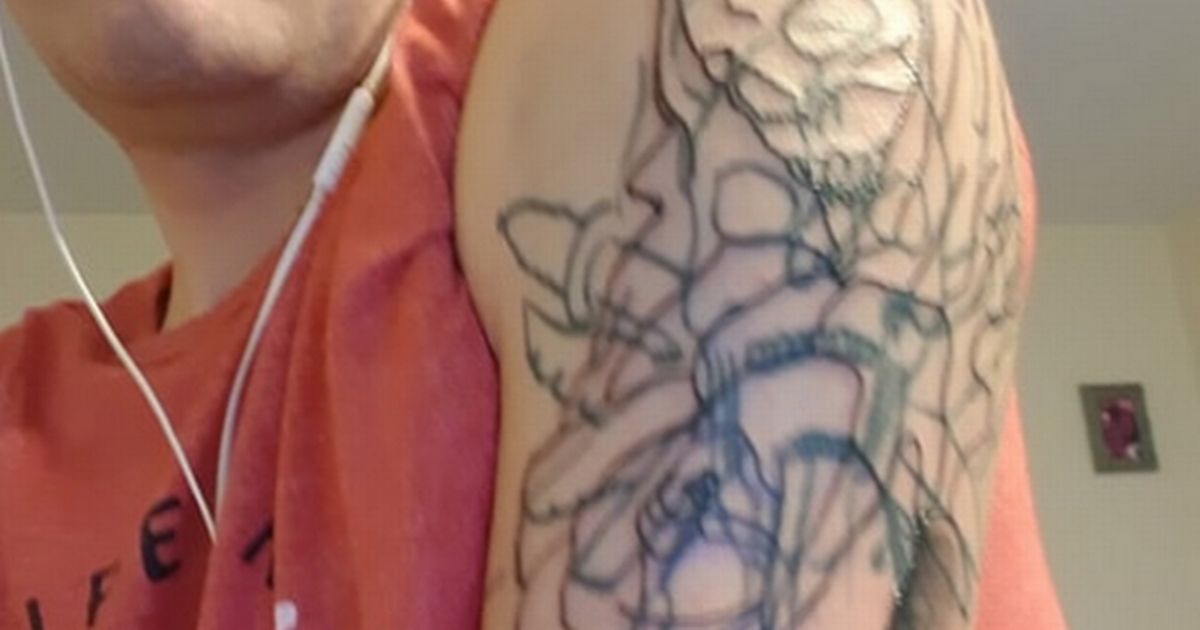 A man who was tricked into letting a charlatan tattoo artist ink him said it looks like “a nine-year-old has scribbled all over his arm”. Christopher Finch, 23, said the tat is so dire it will cost thousands to repair and that no legitimate artist will touch his “car crash of a tattoo”. Mr Finch, from Plymstock, Plymouth, said he wanted to get the skull and cross bones on his upper arm covered with an image of the Grim Reaper. His mum put him in touch with a man she knew who claimed to have “20 years experience”. He took her word for it and arranged for the supposedly qualified tattooist to come and get him inked, reports Plymouth Live. However, it turned out the man, who since disappeared, was a barely qualified apprentice at a local tattoo joint, and despite spending nearly five hours working on Mr Finch’s arm, the results were disastrous.

He left after telling Mr Finch he’d be back to finish the job, but is now AWOL. Mr Finch said: «He said he had 20 years experience in tattooing; I let him come to my family’s address. I genuinely thought he was legit. «I let him do the job, I gave him £80 upfront and he buggered off and he’s left me with that. «I spoke to the shop where he was supposed to be from and they said he wasn’t supposed to be doing this, he was only an apprentice. The amount of complaints this guy has had is unbelievable.

«My mum was good friends with him — she said he did tattoos for a living, he had his own business. This is obviously what he told her.» Unemployed Christopher says his benefits have been stopped so he’s broke and can’t afford to get it right. Joe said: «I am so sad and angry about it. I don’t know what to do or where to turn.

«I’m urging everyone to avoid this guy. Because if you do get a tattoo by him, it will be a bad one. «It’ll look like a nine-year-old has scribbled over you. That’s what he’s done to me — it looks like a nine-year-old has drawn all over my arm.» There are specific laws around tattooing which everyone in or thinking of getting into the profession must abide by. The most basic of which is everyone practicing the profession must obtain a licence. And there are restrictions on where you can actually ink someone, depending on the terms of your licence.