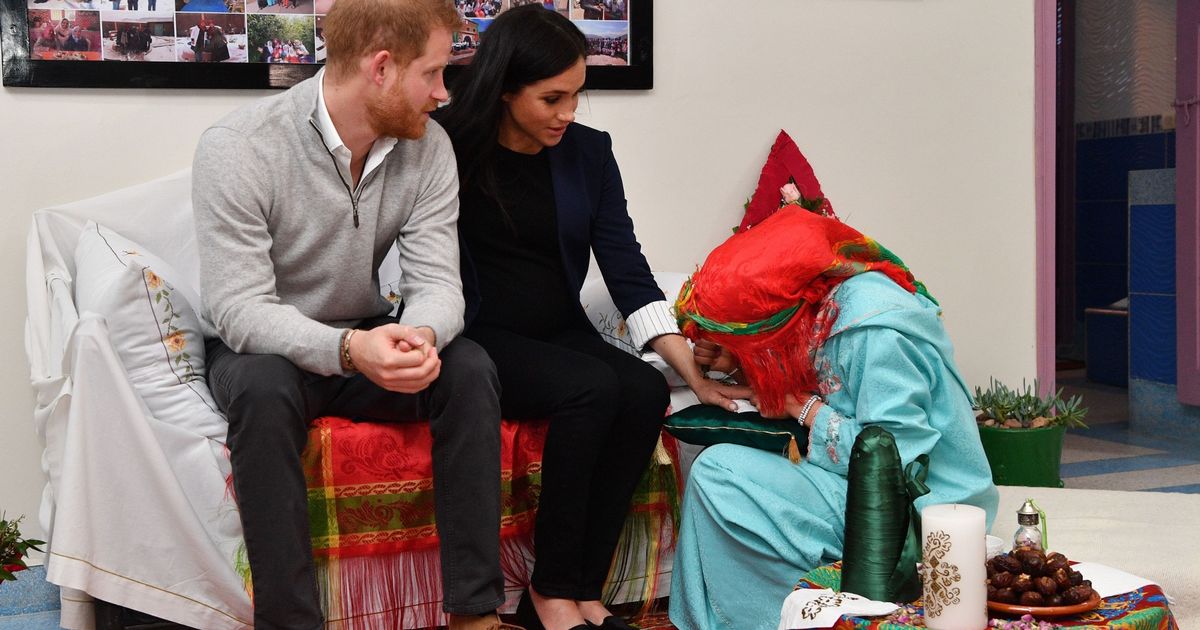 Meghan Markle has received a henna tattoo celebrating her pregnancy during a visit to Morocco’s high Atlas Mountains region. The Duke and Duchess of Sussex touched down in Asni by helicopter to meet young women getting a secondary education thanks to the efforts of a British entrepreneur. In brilliant winter sunshine Harry and Meghan were welcomed to the town of Asni by pupils being taught at a boarding house run by the Moroccan NGO Education For All, founded by Michael McHugo. Resident Samira Ouaadi, 17, became Meghan ’s henna artist. She has lived there for six years and painted the flower on Meghan’s right hand and forearm to mark her pregnancy which is considered a blessing. Read More

The henna is tradition in Morocco during the seventh month of pregnancy to celebrate the health of the mother and baby. Meghan, 37, sat patiently for three minutes while a flower pattern was painted on her left hand. When it was finished she said said it was “really lovely” before showing it off to Prince Harry.

Samira said: “It is a traditional practice for pregnant women in Morocco. It is to bring luck for the baby.” The tattoo, made from a dye from the henna plant, will stay for around two weeks before it fades. It is made from a brown paste by mashing and pulping the plant’s bark. A traditional song and drums were performed by the girls when the couple arrived at the school. They’ve dressed casually for the trip with Meghan sporting a navy jacket  and black trousers and black pumps. Prince Harry dressed down for the visit too with a light grey jumper, pink shirt, casual trousers and tan boots. Inside the classrooms most of the girls were fluent only in French. But Meghan seemed more at ease than her Eton educated husband.

She asked in French: “Qu’est-ce que tu veux etre quand tu quittes l’école?” (What do you want to do when you leave school). She also asked: “Vous voulez aller à l’université?” (Do you want to go to university). The answers impressed Meghan who replied saying they wanted to be teachers, engineers and doctors. “It’s so impressive that so many of the girls are studying maths and physics and the sciences”, she said to Harry. Meghan was amazed about the girls coming back to the school to inspire others calling it “a big family”. The duchess also asked in French if she could enter the girls bedrooms, “On peut renter.” She also used a smattering of French words such as “parfait” (perfect).

Eton College educated Harry, who has delivered speeches in French, was less confident. “Do you speak English? I don’t speak much French,” he said. He added “very good singing” and asked what their lives would be like without the opportunity the school offers them. Khadija ait Talat, 18, “We have been learning about the duchess. She is a beautiful lady. l told her I will be  a science teacher and she seemed very impressed.” Meghan said: “It is really good to see that science is promoted among girls.” Latifa Berrkhouch described Meghan as “beautiful and inspiring” adding Prince Harry had wished her luck for her exams. Nawal ait Idmou, 16, said: “They both seemed very impressed by what was happening at our school.” At the end of the engagement Meghan and Harry spotted two local girls who were waiting for them outside.

Sisters Rania and Rayhana Minejem, five and two, who are half British and half Moroccan, told the Duchess of Sussex they “loved” the henna tattoo she had just had done moments earlier. Meghan said: “Hi girls, how are you? thanks for waiting to see us.” Their mum Clare McCaugey said: “It was so lovely Meghan and Harry stopped to speak to the girls. “I wanted them to come as they are half Moroccan and half British because they live in Morocco they know about their British side but I wanted them to celebrate their British side as well.”  The girls’ grandad Russell McCaugey, 63, from Bangor, Northern Ireland, jokingly called out to Harry saying: “No grand slam this year Harry!” – after England lost to Wales in the rugby Six Nations yesterday.  Harry smiled and called back: “I don’t think they’ll be one for anyone this year.”  Holding Union and Morocco flags the teenage girls smiled as their guests arrived from the capital Rabat by helicopter.

Students living in rural areas of Morocco often have to travel long distances to their nearest secondary school.  Many are also overcrowded with timetables staggered meaning there are large gaps in the day. It means they frequently miss out on their schooling altogether as parents decide to keep them at home over fears of where they will be during the day. Meghan and Harry walked along a line of waiting teenagers and following local custom touched a hand to their heart each time they shook the hand of a student. The duke asked one pupil “Is this the best school in Morocco?” and as they were taken inside the boarding house he put his hand reassuringly on the back of his heavily pregnant wife. Around 70% of women and girls in Morocco are illiterate and the programme helps to improve education and equality for women. The royal couple are in the town learning about the foundation set up by Mr McHugo, who will be presented with an MBE later in the visit by Prince Harry.

Mr McHugo set up the programme in 2008 and now helps 194 girls and young women in five houses in the town, with a sixth due to be built this year. The visit is at the request of the British government and is the second visit to the north African country in the last eight years. Harry’s father, Prince Charles, visited in 2011 while the Queen attended in 1980. The couple will head to another school to watch pupils playing football before meeting Mr McHugo – who was named in the New Year’s Honours List for services to improving gender equality in education in Morocco. This evening the royals will be hosted at a reception by the British Ambassador, Thomas Reilly whose excitable Twitter posts have won him a legion of royal fans after he posted pictures about wearing Union Jack socks.