Mum’s horror as boy, 7, breaks out in terrifying rash after ‘black henna’ tattoo 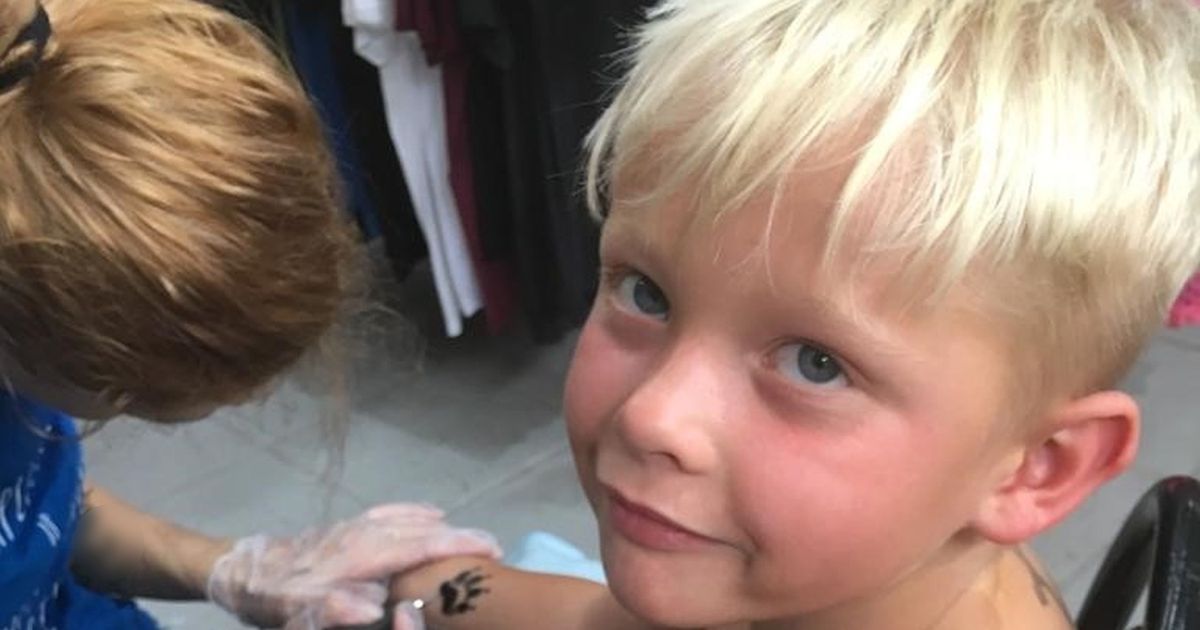 A mum claims she is ‘haunted’ by her decision to let her boy of just seven be covered with henna tattoos on a family holiday that left him with horror chemical burns. The case has sparked a warning from experts to parents that an ingredient found in so-called “black henna” products are actually illegal in the EU because of the health risks, and that safe, natural henna should be orange brown. Multiple tourists have warned of the dangers of getting the temporary tattoos abroad, returning home with painful reminders of what was meant to be a spot of holiday fun. It was a lesson painfully learned for young Owen Richardson, now eight, who was excited to get huge dragon outline and a paw print painted on his right arm and a tribal design across his chest in Spain.

His mum Leanne Richardson, 31, let Owen get the temporary inkings the night before they flew home from their holiday in Salou last August. But a week later the black pigment flaked off and the schoolboy was left with painful-looking chemical burns that triggered an allergic reaction, causing welts to erupt all over his body. Doctors said the burns were caused by Paraphenylenediamine (PPD) – a chemical commonly found in black henna pastes and dark hair dyes – and that Owen may need skin grafts. Leanne, from Consett, County Durham, said: “We knew nothing about the dangers of black henna tattoos, when I finally Googled it my blood ran cold. “It broke my heart at the time knowing I allowed my son to be harmed in this way – it still does looking at the pictures even now and is an experience that will haunt me for the rest of my life.

“He’d had them before in Florida and loved them and decided to have it done on the last day as he didn’t want it to come off in the pool.” The family, including Owen’s dad Chris Richardson, 32, brother Miles Richardson, now four, and grandparents Lynne Owen, 60, and Stuart Owen, 54, visited a beach-front stall and paid 30 euros for the three inkings. SEN teaching assistant Leanne said: “Every time we walked past this place there was always someone there getting one done. “That night we were there first and he had a few done – two on his arm and one on his chest.

“The dragon took up most of his upper right arm and because it was so detailed it took around 40 minutes to complete. “He also had a paw print on his lower right arm and a tribal design on his chest. “Owen was thrilled with them and was beaming – he couldn’t wait to show them off.” When the mum-of-two discovered the chemical burn on Owen’s skin two days later after the henna flaked off she took him to the pharmacy for over-the-counter treatment.

However less than a week later the burns started to weep and look infected so Leanne rang 111 and was advised to go to hospital. Leanne said: “When all the blackness wore off I could see all the scabs and took him to the pharmacy. “The skin didn’t look infected just very dry so I got some antiseptic cream and put it on a few times throughout the day. “On the Saturday, under a week later, they started weeping so I rang 111 and asked if we could get an out-of-hours appointment for the doctor but the operator suggested going to hospital.

“That’s when alarm bells started to ring. It wasn’t nice at all, it was very traumatic.” Leanne and field engineer Chris rushed the youngster to University Hospital of North Durham’s A&E department. There his blistered skin was dressed and covered in bandages and he was prescribed a steroid cream, a course of antibiotics and allergy tablets to tackle the infection and stave off any further reactions. Leanne said: “I was expecting them to be quite judgemental but they weren’t at all, the staff were lovely.

They told us about PPD in black henna and dressed all his burns, he was covered in bandages like a little mummy.” But the following morning things got even worse. Owen erupted in a ‘horrendous’ rash all over his body and was rushed back to hospital where he was admitted to the burns unit and then the children’s ward. Burns specialists, a paediatric consultant and a plastic surgeon examined him and conceded that in the ‘worst case scenario’ Owen would need skin grafts. Leanne said: “He came out in a horrendous rash all over his body, it looked exactly like the burns did, so we took him back to the hospital.

“That’s when he was referred to the specialists where they said it was running its course. “He’d obviously had a terrible reaction to this chemical that caused the rash, but to on the safe side. They referred him up to the children’s ward.

British Skin Foundation spokesperson Lisa Bickerstaffe strongly advised parents and tourists to think twice before risking their skin for a piece of body art. “The public often don’t realise that so-called ‘black henna’ is not true henna – it has been chemically altered with paraphenylenediamine (PPD) to leave a black colour on the skin. “PPD is usually found in hair dye but it is illegal in the EU for skin contact products such as temporary tattoos. “What might seem like a bit of fun on holiday can cause blistering, a severe allergic reaction, scarring and a lifelong sensitivity to hair dye.   “Whilst Owen’s skin has sadly already been damaged by ‘black henna,’ hopefully his story will highlight the dangers to others.” Dr Emma Meredith, a pharmacist and Director General of the Cosmetic Toiletry & Perfumery Association said: “I would urge parents to say no to so-called ‘black henna’ temporary tattoos, however tempting and fun they may seem.”It is important to remember that natural henna is orange brown, and there is no such thing as black henna. “Having a ‘black henna’ temporary tattoo could result in a very nasty reaction or burn and becoming allergic to other products, including hair dyes.  “Steer clear of ‘black henna’ temporary tattoos.”

“He was seen by a paediatric consultant and a plastic surgeon – when I heard a plastic surgeon was coming to see him I panicked. “He said that worst case scenario he could need skin grafts, but they weren’t going to do anything until it was all healed.” Once Owen was discharged a nurse visited once a week for five weeks to tend to his burns. Leanne said that although the burns never caused Owen any pain, he was left feeling self-conscious and kept his scars covered up with long-sleeved tops. Leanne said: “Owen was fine health-wise but he wouldn’t take his t-shirt off even when it was hot, he was very self-conscious.

“Normally he would just whip it off but for a long time after that, well into October, he didn’t want anybody to see them. “I had to tell his teacher about it and bought him a long-sleeved PE top. He was really affected it, but he’s ok now. “Now when I dye my hair he knows he can’t come near me in case it triggers another reaction. In worst case scenarios people can go into anaphylactic shock.” Leanne is now urging parents not to allow their children to have black henna tattoos done so that others don’t go through what Owen has.

Leanne said: “Not everyone has a reaction to it but don’t take that chance, it’s really not worth that risk.” Owen said: “I wanted to get the black henna tattoos because it made me feel grown up, I was excited about getting them done. “The paw print tattoo looked like it was 3D on my arm, now it’s gone. “If anyone wants to get one done I would say definitely say no to having one, not after what I went through.”