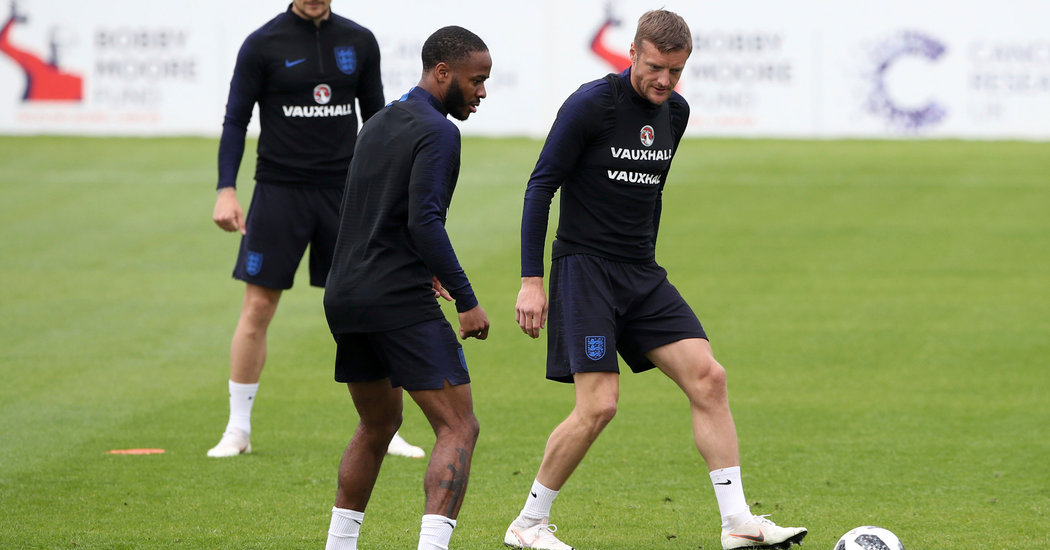 LONDON — He has said he has the kind of face that people just don’t like — “the ‘I don’t like face’” — and, in the past few days, quite a few people have tried to prove him right in what seems a peculiarly British cocktail of race, envy and, of course, tabloid newspapers.

Raheem Sterling, 23, ranks among the most contentious, skilled and expensive of players in English soccer — a game that conjures a national near-zealotry that other sports can rarely match.

For some he is the perennial bad boy, alternately overpaid and profligate or meanspirited and tightfisted, depending on the story du jour. For others he is a role model for young black Britons of bootstraps-up achievement.

But, this week, when he was photographed in The Sun displaying a new addition to his many tattoos, representing what looked like an American military assault rifle on his right lower leg, the furor kicked into a higher gear.

That was not altogether surprising. The World Cup soccer tournament is set to start in Russia in a few weeks, and Mr. Sterling is a member of the England squad for which expectations run high, even though the country has not won the every-four-years joust since 1966.

“Raheem Shoots Himself in Foot,” a headline in The Sun said, inspiring talk on radio chat shows of whether he should withdraw from the England team.

Over many years, it has been the habit — or the sport — of British coverage to build up star players simply to knock them down again. “Unique to this country to attempt to destroy our players’ morale before a major tournament,” said Gary Lineker, a former soccer player who is now a high-profile television sports anchor, said on Twitter. “It’s weird, unpatriotic and sad.”

In recent times, Mr. Sterling, who plays for the Premier League champions, Manchester City, has featured in tabloid stories criticizing the hours he keeps, the cars he drives and the junk food he has been seen to consume.

He has been criticized for buying his mother a house, for flying on a budget airline when he is paid hundreds of thousands of dollars a month and for chartering a private jet.

He has explained the image by saying in a statement that “when I was 2, my father died from being gunned down to death. I made a promise to myself that I would never touch a gun in my lifetime.”

That episode happened when he was growing up in Jamaica before moving to North London. And, he has pointed out, the tattoo is on the same right leg as he uses to kick the ball into the goal with such deftness and regularity as to make him an important part of the England squad. “I shoot with my right foot so it has a deeper meanings,” he said.

But, of course, the latest controversy resonates much further at a time when the United States is seized with controversy over ownership of versions of the weapon Mr. Sterling displays on his leg.

Activists opposed to gun ownership in Britain, which has much stricter rules than the United States and almost no experience with mass killings, have criticized him as glorifying automatic weapons.

The Sun interviewed the father of Damilola Taylor, a 10-year-old boy from Nigeria killed in a stabbing attack in London in 2000, who accused the soccer player of recklessly glamorizing “a gun culture that is claiming the lives of youngsters.”

There have been calls for Mr. Sterling to have the tattoo removed. On Twitter, Piers Morgan, a former tabloid newspaper editor who is now a television host, took issue with “the howling virtue-signalling Twitter PC mob” as being out of touch with popular sentiment about the tattoo.

The sub-theme is, of course, the corrosive issue of race.

“The routes out of poverty are very scarce for the young, working-class black man,” Maurice Mcleod, a columnist, wrote in The Guardian on Wednesday. “Sport, music and entertainment do provide a path for the select few. The narrative reserved for those who make it, though, often sounds a lot like, ‘We have let you in, now don’t do anything that makes us regret it.’”

And on Tuesday, The Manchester Evening News quoted a sports journalist, Paul McCarthy, as saying there “is a section of society that utterly resents a young black kid for being hugely successful and being rewarded for that. Look at all the times there is a reference to ‘bling’ and ‘flash’ when anything is written about Sterling.”

“Then ask yourself whether the same would be written about a white player?” the journalist wrote. “It’s not overtly racist, it’s just that insidious feeling that someone like Sterling is fair game and that he should accept this kind of treatment.”