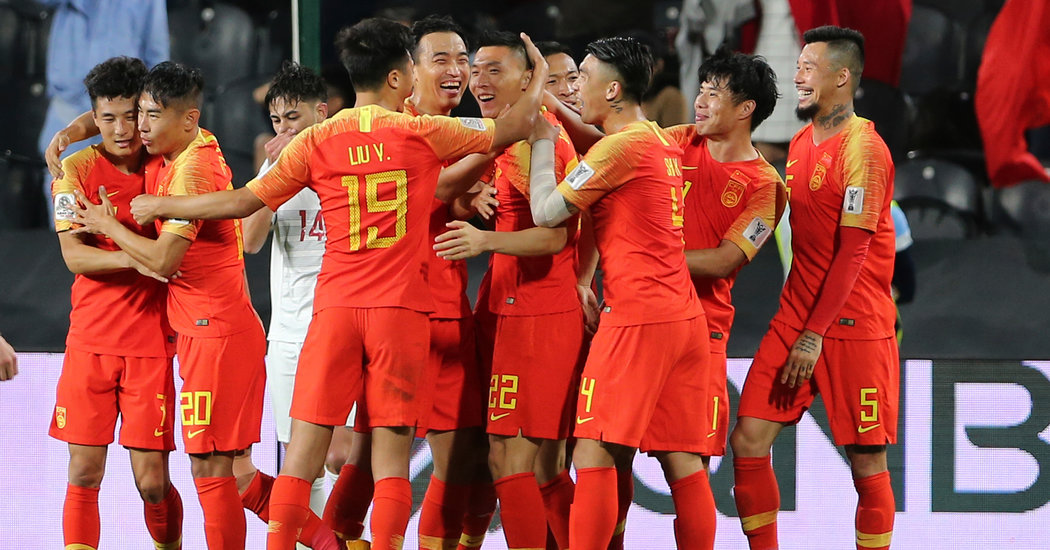 ABU DHABI, United Arab Emirates — China’s recent attempts to emerge as a serious soccer nation after decades in the sports wilderness have taken some curious turns. One of the more recent ones is visible — or, rather, invisible — at this month’s Asian Cup.

Temperatures in the tournament, which is being played in the United Arab Emirates, can be stifling, making the sight of some Chinese players wearing long-sleeved undershirts beneath their jerseys seem puzzling.

The answer lies in a semiofficial edict from Chinese sports officials issued last year that bans tattoos from being visible during matches. The directive applies to the national team but also to Chinese players in domestic competitions, like the Chinese Super League.

Soccer is now a national priority under President Xi Jinping, and China’s soccer authorities expect the country’s best players to promote positive values to the next generation of athletes and their parents, some of whom remain wary of allowing their children to play a sport they consider to be dangerous or, worse, frivolous. In many ways, the no-tattoos rule is a microcosm of the never-ending wrestling match that China’s central government conducts with its sometimes-dueling allegiances to modernity and control.

The rule can be more onerous for some players than for others. Take the heavily inked central defender Zhang Linpeng. Most of his body, including the entirety of both arms, is heavily tattooed. He has been playing with a compression shirt underneath his national team jersey at the Asian Cup, though he has avoided covering the markings on his right leg and his neck.

Other players have less work to do; a tattooed back or calf is often covered by a player’s uniform, while a smaller bit of artwork can be hidden under athletic tape. (Zhang and others have managed to get some respite: Covering tattoos isn’t mandatory for training sessions.)

The Chinese soccer federation and tournament organizers clearly do not want to talk about the issue, however. At a news conference before a game with South Korea this week that will decide top spot in Group C, a tournament official tried to shut down a question about the tattoos before the Chinese national team coach, Marcello Lippi of Italy, could answer it.

After it was rephrased, Lippi gave a short, diplomatic response, saying he was not unduly concerned by the edict. The team’s captain, Zheng Zhi, sitting to Lippi’s right, stifled a laugh but declined to comment on the issue.

“This is only a detail; I don’t really want to talk about this,” Lippi said through a translator.

A few months before the ink ban was imposed on Chinese soccer players, television stars faced similar restrictions as part of government efforts to control what viewers were being exposed to in the media. The soccer rules were brought in so quickly, though, that some clubs simply chose to heavily bandage their players before they took the field.

The tattoo ban has become a lively topic on Chinese social media. Many people in China appear to support the official view that the players are public figures and should act accordingly. Others have ridiculed the move, which is at odds with a current trend in Western sports, where elaborate tattoos are now as commonplace as cleats and jerseys. Zlatan Ibrahimovic of the Los Angeles Galaxy is covered by them; Barcelona’s Lionel Messi now has a long sleeve of art on his right arm and another on his left leg.

Zhang, a defender considered one of China’s best players, did not play in two national-team matches after the tattoo ban was established in March. The official reason was injury, but angry fans speculated on social media that China had been thrashed in matches against Wales and the Czech Republic because it was forced to play without Zhang, who they suspected had been benched because of his body art.

China has been pumping millions of dollars into soccer since 2015. A sleepy national league is now backed by some of the country’s biggest companies, whose lavish spending quickly attracted world-class coaches and players in search of some of the biggest paydays in the sport. A more intense focus is on creating a national team capable of transforming itself from a punch line into a force that can compete with the best in Asia and, eventually, against the best in the world.

The road to get there has been bumpy, though, with soccer officials, typically political figures, chopping and changing policy, or introducing rules that some have found hard to follow.

Last year, for example, top clubs were taken by surprise when the Chinese Football Association suddenly announced the best young players would be pulled from their club teams midseason and sent for military training, a practice that China has used with top athletes in other sports. Images of players with freshly shaved heads being put through drills by specialty trainers were beamed around the country.

The effects on some teams were significant. Dalian Yifang F.C. lost four straight games and was pulled toward relegation after three of its young starters were called up.

It is unlikely the best young players will be going back to their clubs anytime soon. Plans have been announced to create a team composed of young Chinese to play in the second division for a team recently created by a university in Beijing. The team could function as a kind of second national team.

China’s men’s national team has not played in a World Cup since its first appearance in 2002, when it lost all three of its games. Its leaders have targeted hosting the event in 2030, and winning it by 2050. To do that, Xi has set a target for 20,000 training centers and 70,000 soccer fields to be established by 2020.

The efforts are immediately visible. Private soccer schools have mushroomed in the major cities, and European coaches of varying abilities are being recruited at staggering rates.

Lippi, who won the World Cup as Italy’s manager in 2006, has seen much of it. He moved to China in 2012 to run the big-spending club Guangzhou Evergrande, and has announced that he will step down as national coach after the Asian Cup. He has stressed a focus on youth development as a path to China’s soccer goals.

“Six years ago in China there were not so many young players,” he said. “This is the only way if you want to become stronger in the future. China has to continue to work in this direction.”

Regardless of how fast it improves, however, don’t be surprised to see some players turning up in long sleeves on the way there.