The founder of Moyun Wenshe Mo Yun, formerly known as Xing Yiyun, was born in Hengshui City, Hebei Province in 1987. He has loved painting since childhood. He once studied under the famous Chinese calligrapher Lin Han, and then visited famous teachers around the world to teach. Specializing in Chinese ink painting.
He has been engaged in tattoos since 2003, and his works have been well received by tattoo lovers! Known as the “youngest predecessor” in the tattoo industry.
But Mo Yun’s friends and familiar customers call him “Xiao Yun”, which is not only a kindly self-styled name, but also a recognition of his work.
Mo Yun believes:
Tattoos are the art of tattoo lovers
Listening to the words of tattooists is more important than design
Tattoo art should be revived in China 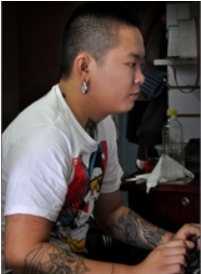