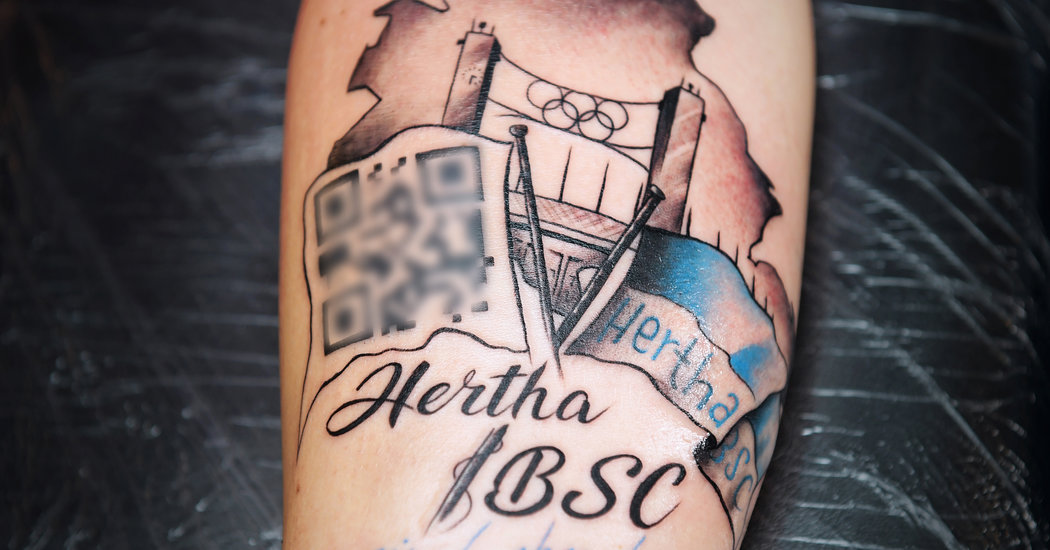 BERLIN — Ilja Pankow didn’t dither when he read about the contest on his phone. He submitted an entry without hesitation. There was no doubt in his mind that he deserved the prize.

In fact, Pankow’s only moment of uncertainty arrived when he found out that he had won.

“I thought: Oh, no. It’s real,” he said, using somewhat more colorful language. “And then I thought: Uh oh. I’m getting a tattoo.”

This year, Hertha Berlin, the top professional soccer team in the city, unveiled an unusual promotional contest with an unorthodox prize: an ostentatious tattoo embedded with a data matrix bar code that serves as a scannable, lifetime ticket to the team’s home games.

The club asked fans to prove they deserved the honor, and Pankow, 31, a credit assistant with Mercedes-Benz from Berlin, sent a two-minute video showing his collection of 30 signed jerseys, photographs of trips he had taken to watch the team on the road and other material evidence of his fandom. He called Hertha, nicknamed the Old Lady, the love of his life. And he offered, as an additional sweetener in his argument, “I’m a tattoo virgin.”

Hertha received almost 900 submissions, according to Daniel Schmid, its head of brand management, and picked Pankow, in part, “because he is a likable guy.”

After some initial shock, Pankow was ready to wear his allegiance on his sleeve. In late February, he sat for two hours at a studio called Love Is Pain, which has inked famous athletes like the Bayern Munich and Germany defender Jérôme Boateng. The resulting tattoo, which shows Hertha’s stadium and its flag against the outline of Berlin, covered nearly all of Pankow’s right forearm.

“I think my mom was more happy about it than me,” Pankow said.

Pankow was born in the former East Berlin. He became a fan of Hertha, situated firmly in the West, in second grade, when he saw the team’s jersey hanging in a store and begged his aunt to buy it for him. With Berlin no longer a divided city after Germany’s reunification in 1990, he began attending games regularly when he was 12, boarding the train in an eastern neighborhood squarely in the territory of Hertha’s intracity rival, F.C. Union Berlin.

“My luck was that I was too young, and they couldn’t do anything to me,” he said of the rival fans.

On the last Saturday in April, Pankow met his friend Koni in the city center to catch a train to Hertha’s match that day at the Olympiastadion. He wore a denim vest covered with Hertha patches. “My mom made it,” he said with a sheepish laugh.

The train was late, and the two men sipped their beers, anxiously monitoring the time on their phones. Koni tilted his head and examined the tattoo and its enormous QR code. “I’m happy for you,” he said with a smirk. “But it should have been me.”

Schmid said that the prize had no maximum value and that the winner was allowed to pick a lifetime seat anywhere in the stadium. Pankow nevertheless elected to stay in the Ostkurve, the cheap seats on the stadium’s eastern end, where he has long kept a season ticket for around 150 euros a year (about $180).

He laughed aside a question about whether his devotion to the team might fade faster than the tattoo. He said he had seen the good and the bad, the Champions League and two relegations to the second division. He guessed that he had missed, at most, only two home games in the last five years.

With kickoff approaching, Pankow rushed through the security outside the stadium using his normal season-ticket card. The bar code on his arm works, he explained, but sometimes it takes an extra few seconds to scan and creates an awkward situation at the gate, and last week he and Koni had no time to spare.

But he was adamant that he had no regrets about the tattoo, even if future changes in technology, or a significant change in his body shape, might render it useless.