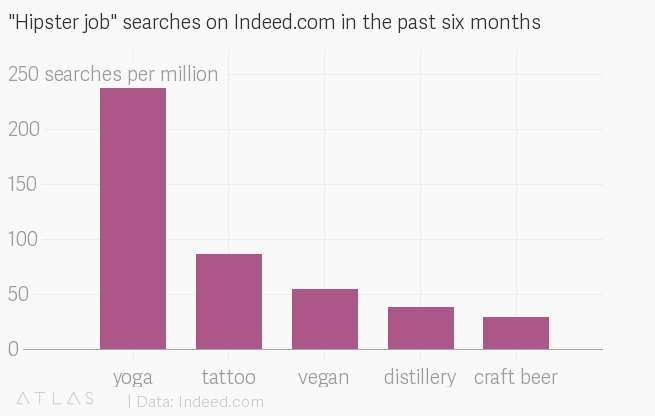 There is no such thing as a “hipster job” in any employment agency. However, this does not mean that this does not exist in real life. The last two decades have revealed to the world such a socio-cultural stratum as hipsters , and the labor market, whether it wants to or not, has to adapt.

The occupation of the tattoo artist was also referred to the hipster classes.

Numerous craft beer and breweries, coffee shops and barbershops, yoga courses, vegetarian snack bars, small clothing stores that are made from natural materials, and so on … All this has created a demand for those who are able to work in these areas. And those who want to work in such institutions are many times more than it is required. Specialists of the service for finding a job, Indeed, for the hipster classes, also referred to the profession of a tattoo artist.

Studies are based on the analysis of search queries when looking for a job.

Indeed decided to analyze the distribution of demand for these so-called hipster vacancies . It turned out that over the past three years (from 2015 to 2018) there has been a qualitative increase in interest (57%) for vacancies, which here have been called hipsters . These studies are based on the analysis of search queries when looking for a job. Filters were words like vegan , yoga , organic , farm food , coffee , independent , vintage , crafting, and so on and so forth.

According to Indeed , yoga is the absolute leader among US hipster industries. It is in this industry that the American millennials are most willing to work. But the second area where hipsters want to earn their bread is a tattoo ! However, there is an inverse relationship: among the proposed vacancies, yoga instructors and tattooists are quite rare, which cannot be said about hairdressers, bartenders and chefs.