Who Gets a ‘Game of Thrones’ Tattoo? 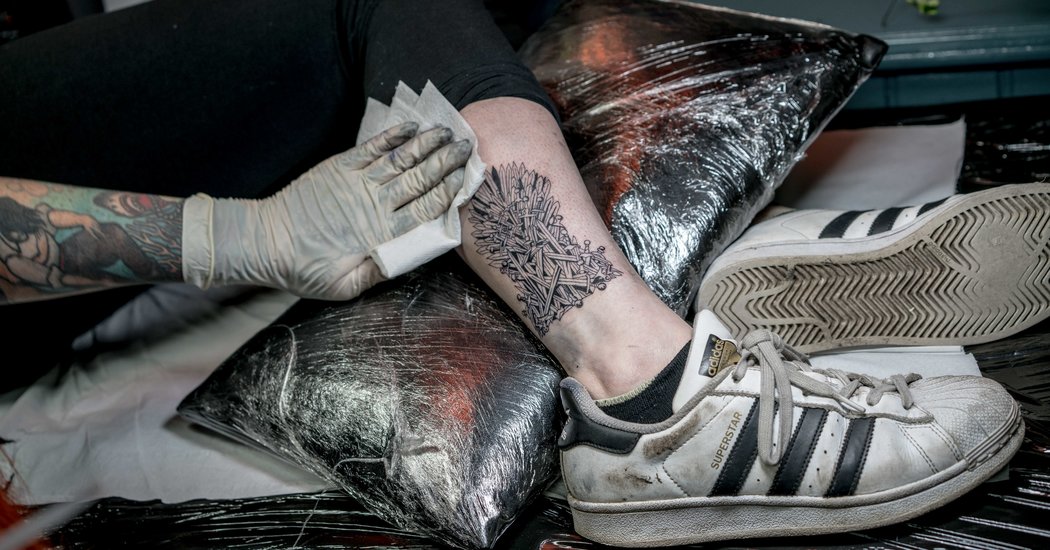 LONDON — Last Wednesday, Rebecca Gosnell, 24, stood outside the Circle, a tattoo parlor in London, waiting to get her first tattoo. It was going to be of a sword, called Needle, from the hit television series “Game of Thrones.”

In the show, that sword belongs to Arya Stark, a young woman trying to make her place in a man’s world, not unlike Gosnell herself. But there was also a simpler reason she had decided to get it done: “It’s free,” she said.

Gosnell was one of about 30 people, mainly women in their 20s, in a line to get “Game of Thrones” tattoos, offered as part of a promotion by NOW TV, a British streaming service. The show, a fantasy epic produced by HBO, is in its final season.

NOW TV’s offer sounded like a desperate bid to get some media coverage, and maybe sell a few subscriptions. There have been many headline-grabbing stunts recently that a cynic could roll their eyes at: Fender, the guitar maker, for instance, introduced a range of “Game of Thrones” instruments this month. (Yours starting at just $25,000.)

Yet many standing in line for the free tattoos spoke passionately about how “Game of Thrones” had inspired them, and it was hard to be cynical about that.

“There’s so many characters in the show who are underdogs, and they get really badly treated by life and people, so they have to rise up,” Gosnell said. She had been bullied herself, and was coming out of a bad breakup, she added. Looking at the sword tattoo would empower her, she said.

Even the oldest fans in the line — a married couple, both called Shane Horrell and both 43, (“It’s hell for us at airports,” one joked) — said the show’s characters meant a lot to them. One of the Shane Horrells was getting a tattoo of a dragon that Daenerys Targaryen rides in the show.

“Daenerys, she’s come from nowhere to where she is now,” Horrell said. “She’s been through so much. That’s inspiring.”

“That’s one reason I’m getting it,” he added. “Oh, and because dragons are cool.”

“Game of Thrones” tattoos are nothing new, according to Lauren Winzer, an Australian tattoo artist who designed them for the NOW TV promotion, and had flown out for the event. Visitors to the Circle could choose from 16 of her designs, including phrases like “Winter is Coming” written in Gothic script and a picture of the show’s famous Iron Throne. Over 6,000 people applied for 50 slots, a NOW TV spokeswoman said.

In Sydney, Australia, where Winzer is based, many fans at first wanted tattoos of the direwolves, she said, animals in the show that bond with and defend some characters. She even tattooed one on Sophie Turner, one of the lead actors in “Game of Thrones,” with the phrase “The Pack Survives” underneath. (“I was kind of stressed doing that, as I was like, ‘This is your show,’” Winzer said.)

“It’s just getting something you love and relate to,” Winzer replied, when asked why people wanted “Game of Thrones” tattoos. “I mean, I’ve got ‘Simpsons,’ ‘Addams Family,’ tattoos.”

Recently, fans were getting more obscure ones, so they stood out, she added. In London, she tattooed one fan with a door that had the phrase “Hold the Door” written on it, she said, a reference to a climactic scene from “Game of Thrones” season six.

Around the corner from the NOW TV promotion, in another parlor called Gypsy Stables, Cesar Pimenta was preparing to ink an image of a leopard onto a customer who appeared to have little space left for new additions. Pimenta said he’d seen people getting “Game of Thrones” tattoos for years, but he had only done three himself.

“I did two dragons on someone’s hands, and then I did this crest from the show of a dead man on a cross,” he said. “It looks like a guy getting tortured.” Wasn’t that too dark a symbol to tattoo on someone? “It’s cool, so why not?” Pimenta said.

Pimenta was not as obsessed with “Game of Thrones” as some of his customers, he said, but he did get fans’ obsession with wolves, an animal he said he felt a special bond with.

“It’s one of the few animals with spiritualism,” he said. “I lived in Finland before and listening to the wolves at night, howling in the forest, is a beautiful feeling. It gives you this kind of magical touch to your soul,” he added.

Back at the Circle, the parlor’s five chairs were occupied, and a steady trickle of “Game of Thrones” fans emerged from the basement with their new, free, tattoos. (None were of wolves. They were mostly dragons.)

In the line outside, Johnny Hargis, 23, on vacation from the United States, where he worked at Disneyland, said he wanted to get the sigil, the royal symbol of Daenerys Targaryen, on his arm. In the show, Hargis explained, Daenerys Targaryen sets slaves free, and “wants to crush the oppressive system of the monarchy.”

He added, however, that he was not against Britain’s queen. Daenerys Targaryen wasn’t “against monarchies, just oppression in general,” he said. “Fighting injustice is really inspiring.”

Ashleigh Quelch, 25, a maintenance engineer in the auto industry, came up from the basement with a new seven-pointed star on her wrist. She had chosen a subtle tattoo, she said, so it wasn’t obviously connected to the show. “I appreciate people having images of movies and bands and things, but it’s a bit obvious,” she said. “This is classy.”

Why did she think people were so obsessed with the series? “It’s just a massive soap opera — a soap opera with dragons,” she said, and viewers could identify with the characters. But it was also because it was simple escape.

“I read something interesting the other day,” Quelch said: “That we were born 100 years too late to explore the earth, and 100 years too early to explore space. We are in this boring middle bit. So we have ‘Game of Thrones’ instead.”