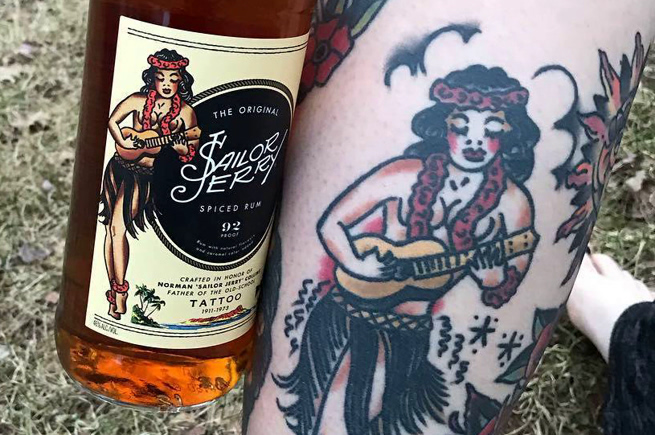 We have already tried to figure out Sailor Jerry . The story is somewhat confusing and clear understanding in this matter does not exist. The direct heirs of Norman Keith Collins (the one who is best known under the pseudonym of Sailor Jerry ) strongly disagree with the status quo. While those who today mercilessly exploit his name and the objects of his work, declare that everything is being done on absolutely legal grounds.

Norman Keith Collins left this bustling world in 1973. The fact that his life was more than bright is the fact that the cause of death was the fall from his beloved Harley, which he himself ruled. It is believed that at the moment the rights to use the name and image of Sailor Jerry , as well as the rights to his drawings, belong to the English alcohol giant William Grant & Sons . Since 2008, this company has been very successfully producing and selling rum after the name of the great tattoo artist – Sailor Jerry Spiced Rum .

On the island of Oahu, in Hawaii, there was a studio where Sailor Jerry worked during the war and post-war period. For several years in June there has been an annual festival named after him. It was on these dates that the local court entered, according to all the rules, a lawsuit filed by the widow of the old school of all time, Louise Collins . By the way, she already turned for 83 years. The lawsuit contains 92 clauses, each of which, she claims, is proof that William Grant & Sons conducts illegal activities, using the name and pictures of Sailor Jerry .

The defendant, an alcoholic company, William Grant & Sons, has not yet responded

“Long years spent together allow me to say: Norman did not drink alcohol at all! He was a very respected person among those who chose to serve their country in a vital way. He made tattoos during the Second World War. And it was a great honor! For what remained on the skin of sailors and pilots, then it turned out to be in the hellish hell of military battles. These were symbols of love, dreams, feelings, which later became an identifying sign confirming what their owners had to go through , ”said Louise Collins in the statement of claim. The defendant, the alcoholic company William Grant & Sons , has not yet responded to all this.

This is done only to increase alcohol sales among the crowd of hipsters.

“The remaining members of Sailor Jerry’s family in this world categorically do not support the principles that those who make millions of dollars selling this alcoholic beverage profess. I know for sure, my husband would reject them, if he was alive. All this is done only to increase alcohol sales among the crowd of young hipsters. ”

All this time, my daughter and I lived in extreme need

“I know how it happened. Two young tattoo artists (Mike Malone and Don Ed Hardy) were students at my husband’s studio. After the death of their teacher, they bought the entire contents of the studio, started their own company and, without proper permission, started using drawings and the name of Sailor Jerry, making clothes, souvenirs, and so on. Then, they all sold it to William Grant & Sons, also without any right to it. All this time, my daughter and I lived in extreme need, only for the benefit that the government paid us. ”