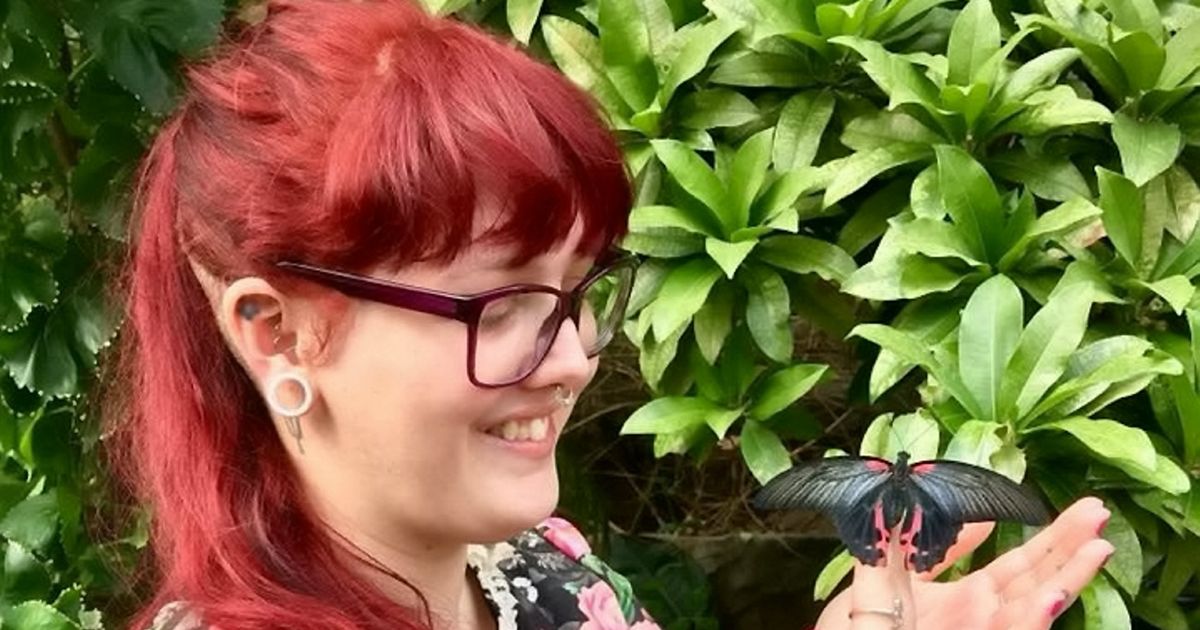 A healthcare assistant who has spent up to £5,000 to cover herself in tattoos has revealed how they saved her life as they stopped her from self-harming. Jade Wilkinson, 25, fell into depression after her parents divorced when she was seven, and it wasn’t long before she fell into the wrong group of people. As a teenager she was drinking heavily, taking MDMA and having sex which she now regrets. She started cutting her thighs at the age of 15 and pushing pins under her nails in a bid to cope.

But she said covering herself in tattoos helped boost her confidence and learn to love herself – and gave her a “buzz” she used to get from harming herself. Now she has 75 tattoos covering her arms, legs, stomach, back and head – featuring everything from her loved ones’ handwriting to Harry Potter spells. Jade reckons she has spent £5,000 on her designs but said it was worth every penny because she wouldn’t be alive if she hadn’t had them done. “Tattoos saved my life,” said Jade, from Washington, Tyne and Wear.

“I suffer from mental health problems and depression and I used to self harm, but I stopped cutting and started getting tattoos. “My tattoos have helped improve my mental health and stopped me self harming. “It’s genuine therapy. “It’s the build up before it happens, sending the idea to the artist, going there on the day, waiting and then watching the artist do it for a couple of hours, being in pain, and then the adrenaline when you see it.

“That’s what I was looking for when I was cutting myself. But this pain is different – it’s a means to a positive end. “I think I’m probably addicted but I think there is worst thing to be addicted to. I have been addicted to worse things for sure.” Jade said with hindsight her mental health problems started when she was around seven, after she struggled to cope with her parents’ divorce. She didn’t feel like she had anyone to turn to, started to become more reclusive and fall behind in school, and struggled with the way she looked. “When I was growing up and had problems with depression and anxiety, I didn’t know what it was, or how many people had it,” she said.

“It’s a really lonely thing to go through.” Falling in with the wrong crowd, she had older boyfriends and would regularly take MDMA. “Cutting was an external pain I inflicted because I had a lot of internal anguish,” she said. “It felt like a good way to release it. “I think I was looking for love in the wrong places.

“I made very bad choices of boyfriends. “The self harm escalated when I had other boys who were controlling my body. It was like my way of making it mine. “I was having sex with people that I shouldn’t have and didn’t really want to. I didn’t know how negative it was. I think lots of teenage girls go through struggles like that. “I was totally out of control. It was a gateway thing. “I wasn’t self harming every day but was doing it regularly.

“I would never cut myself anywhere that people could see.” She got her first tattoo aged 17 – a star inside her ear – and it was the start of her getting back on track. “It was pain, but it was art,” she said. “Lots of people go to the hairdressers to chat, and gossip, and come out and feel better and look great. “Going to a tattoo studio is like that for me.”

She went to Teeside University, leaving behind “toxic” relationships, and started to get heavily tattooed in her final year. She stopped cutting, finished her degree in psychology, and got a job in America at a summer camp where she met inspirational friends. She now has 75 tattoos including “expecto patronum” – a spell from Harry Potter – in JK Rowling’s handwriting on the inside of her elbow.

She has a bee on her knee and a bow on her elbow – because they rhyme – and shaved her head to have a mandala, a Hindu symbol, inked on her scalp. She has an Alice in Wonderland themed design on her thigh – covering some of her scars – as well as other designs like roses, skulls, birds, a French Bulldog, a moth and a pencil. Family-orientated Jade also has her gran’s and her mum’s handwriting inked on her skin, as well as a ‘trust tattoo’ – a big dipper constellation her boyfriend chose while she was blindfolded.

She said: “I have something on every bit of me. I feel like a constant work in progress – literally and as a person. “I used to struggle and be ashamed and in denial about self harming and taking medication or that I had depression. “Now, since getting tattoos, I feel more confident to talk to people about it. “If I didn’t have the tattoos I don’t know if I would be as confident to talk about it. I think I like myself a lot more now, and that has helped me be more open.”

Jade still takes medication for depression but no longer self harms and describes herself as “better than I have ever been but still not perfect”. She feels the difficulties she has overcome – and her tattoos – help her in her job as a mental healthcare assistant. “I’ve had people refuse care from me because of my tattoos and people say ‘where did you get her from?’ but at the same time I’ve had people say they can really relate to me,” she said.

“It’s not very common for nurses to have tattoos. I get asked all the time ‘have you been to prison, pet?’ or ‘were you a sailor in a past life?’ “But now I like the way I look because it’s my choice. “I picked the tattoos, I dye my hair whatever colour I like, and it’s my way of taking control.”